Toxic Algae Incidents Across the World

We have found a lot of damage across the world  from toxic algae blooms and copper sulfate, which is the most commonly used water treatment by government bodies. This article is not meant to scare, but rather to inform our audience of the growing algae problem that is infecting our pets, children and the future of the world’s waterways.

Please let us know any incorrect information or an update we may have missed from the past few decades. Thanks for your interest in finding a better solution to the global water pollution crisis. 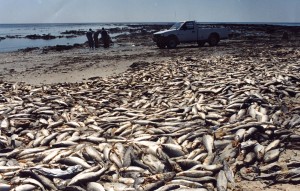 Government intervention is more often used for tracking and gathering data to clean the blooms rather than invest in finding strategies to stop the problem at the source.

For years, the EPA has practiced Nutrient Management Initiatives around the great lakes with $10 million recently appropriated to Lake Erie to reduce the open lake placement of dredge material with funds used to identify or develop alternate uses for this material as well as additional disposal locations.

We need solutions to the problem, not another way to reduce farmer fertilizer runoff. (this helps, but is not a long term solution)

Together we can reduce waste and use less harmful chemicals that are spread into lakes, or we can admit that as humans we will continue to have toxic waste regardless of how much money we throw into these initiatives.

Nualgi has innovated a cost effective natural solution that balances the water food chain and does not require any changes to farmers or citizens routines.

* Please let us know any events we might have missed in the past few decades. Contact Nualgi

1931: Human death and illness along the Ohio River

1979: 140 Australian children and 10 aduls hospitalized after copper sulfate treatment of their water supply

1994: Approximately 60 tons of rock lobster and 1500 tons of fish washed ashore in Africa due to expansive red tide

2003: Lake Winnipeg deemed unsafe for swimming and drinking due to Algal Toxins

2006: 29 people afflicted with paralytic shellfish poisoning due to Red Tide on Vancouver Island

2009: CDC reports algal blooms sickened at least 61 people in the US

2013: CDC Reports that 368 poisoned dogs represent “a small fraction of cases that occur through the U.S. each year

2014: 47% of healthy people in a Baltimore study were diagnosed with the ATCV-1 neurological effecting algae virus (and had no idea)

Sign-up for our Newsletter to get pond care articles & resources.

Sign up for our Newsletter to get first look at all of our pond care articles & resources for pond owners as well as exclusive discounts on Nualgi products.

Almost Finished! Please confirm your subscription by clicking the link in the email we just sent you.